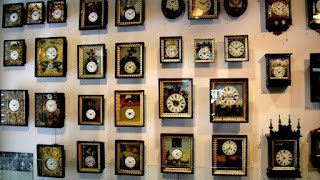 The German Clock Museum (German: Deutsches Uhrenmuseum) is situated near the centre of the Black Forest town of Furtwangen im Schwarzwald, a historic centre of clockmaking. It features permanent and temporary exhibits on the history of timekeeping. The museum is part of the local technical college (Hochschule Furtwangen).

The museum is devoted to the history of timekeeping devices. A major focus is on clockmaking in the Black Forest, both as a cottage industry and on an industrial scale. The museum has an extensive collection of clocks and other artefacts relating to horology, not just those from the Black Forest, but also clocks and watches from around the world and spanning from prehistoric times to the present. The collection includes early cuckoo clocks from the 18th century as well as the prototypes of the modern Black Forest souvenir. The work of Robert Gerwig formed a primary basis of the museum.

Around one third of visitors book a personal guided tour during which clocks and musical instruments are set in motion. Especially during the holidays children may build and decorate a clock in the "clock workshop". For school classes the museum offers themed workshops in modules, some of which are designed to match the education syllabus. The collection has 8,000 items and about 1,300 clocks are permanently displayed. As well as clocks, the collection includes a company documents archive and a specialist library of German-language literature.

In 2006 the museum was one of 365 places selected to represent Germany in the federal chancellor's competition, Land of Ideas. In 2008 the museum was awarded the distinction of being an "anchor point on the European Route of Industrial Heritage". At the same time the museum became a milestone on the German Clock Road that links places in the region associated with clockmaking.

1858: the collection is exhibited for the first time at the Black Forest Industry Exhibition in Villingen.

1874: historical clocks together with contemporary products of the region are put on display in the newly built trade hall.

1959: a new building is opened on the site of the old wooden building that had fallen into decay.

1975: the state of Baden-Württemberg purchases the important clock collection from the Kienzle clock factories and transfers it to the museum. Due to the expansion of its collection to include pocket watches and Renaissance clocks, the "Historic Clock Collection" is renamed in 1978 to the "German Clock Museum".

1992: the current museum building is opened. Today the German Clock Museum is part of Furtwangen University.

Since 2010 the museum has put on a permanent exhibition, covering an area of 1,400 square metres, of the development of clocks and the concept of timekeeping in Western countries. In addition to improvements in the accuracy of timepieces, it also demonstrates the various requirements that clocks and watches met in order to satisfy the needs of the time. Thus, in addition to prize exhibits, the museum also displays objects that, despite their low value, were historically very important. This distinguishes the German Clock Museum from clock collections that display objects that were rather rare and expensive compared with those in typical everyday use.

The circular tour is divided into the sections covering the following themes: History of Clocks and Time up to Industrialisation; Black Forest Clocks; Pocket Watches and Wristwatches; Modern Times and Mechanical Musical Instruments.

History of Clocks and Time up to Industrialisation

Until well into the 20th century, clocks were based on the (apparent) course of the sun and the stars in the sky. This connexion is clearly built into the works of the priest-mechanics of the 18th century with their clockwork models of the cosmos.

Wooden clocks from the Black Forest

In the 18th and 19th centuries the Black Forest supplied the world with low cost clocks. In many small clockmaking workshops, clocks with wooden movements were made which, thanks to the cheap raw material, the use of special tools and machines and specialised craftsmen, were inexpensive and faced no real competition.

A wooden clock face with a white background and colourfully painted motif decorated the Black Forest clocks during the whole of the 19th century. With a colourless, protective varnish the clock faces were resistant to moisture and dirt. From the second half of the 18th century, the varnished plate clock (Lackschilduhr) dominated the European market. Later it found its way overseas and to the Far East. The design of the clock plate varied depending on the country being exported to. Black Forest traders, the clock carriers (Uhrenträger), sold the clocks locally.

Clock industry in the Black Forest

In the second half of the 19th century, clock factories displaced the traditional manufacture of clockmaking in the home. Initially relatively small firms emerged that specialised in the production of short runs of qualitatively high value clocks based on the traditional prototype. Over time the factories that became successful were those, especially in the Württemberg (eastern) half of the Black Forest and neighbouring Baar region, that embraced new types of clock, like alarm clocks, that were suited to industrial processes. In most households there was a clock suited to each room, from the alarm clock to the kitchen clock to the sideboard or wall clock.

In the 16th and 17th centuries the sometimes voluminous neck clocks (Halsuhren) were more of an expensive piece of jewellery than an accurate timepiece. Not until the time around 1800 were the first pocket watches available for the landed gentry and for science, but at best they displayed minutes. As a result of industrial manufacturing in the second half of the 19th century, however, the pocket watch became an everyday item.

Among the highlights of its permanent exhibits are: